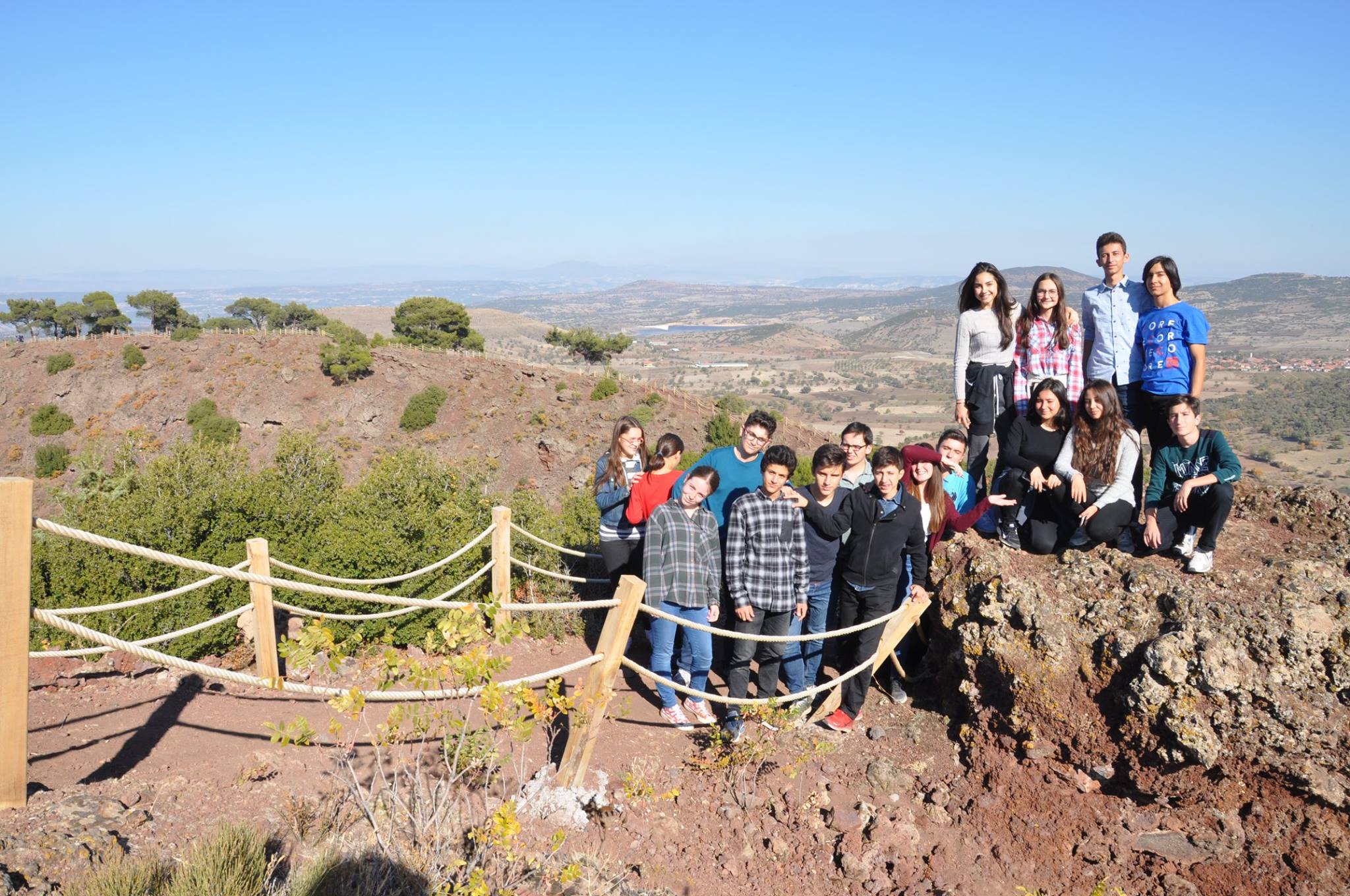 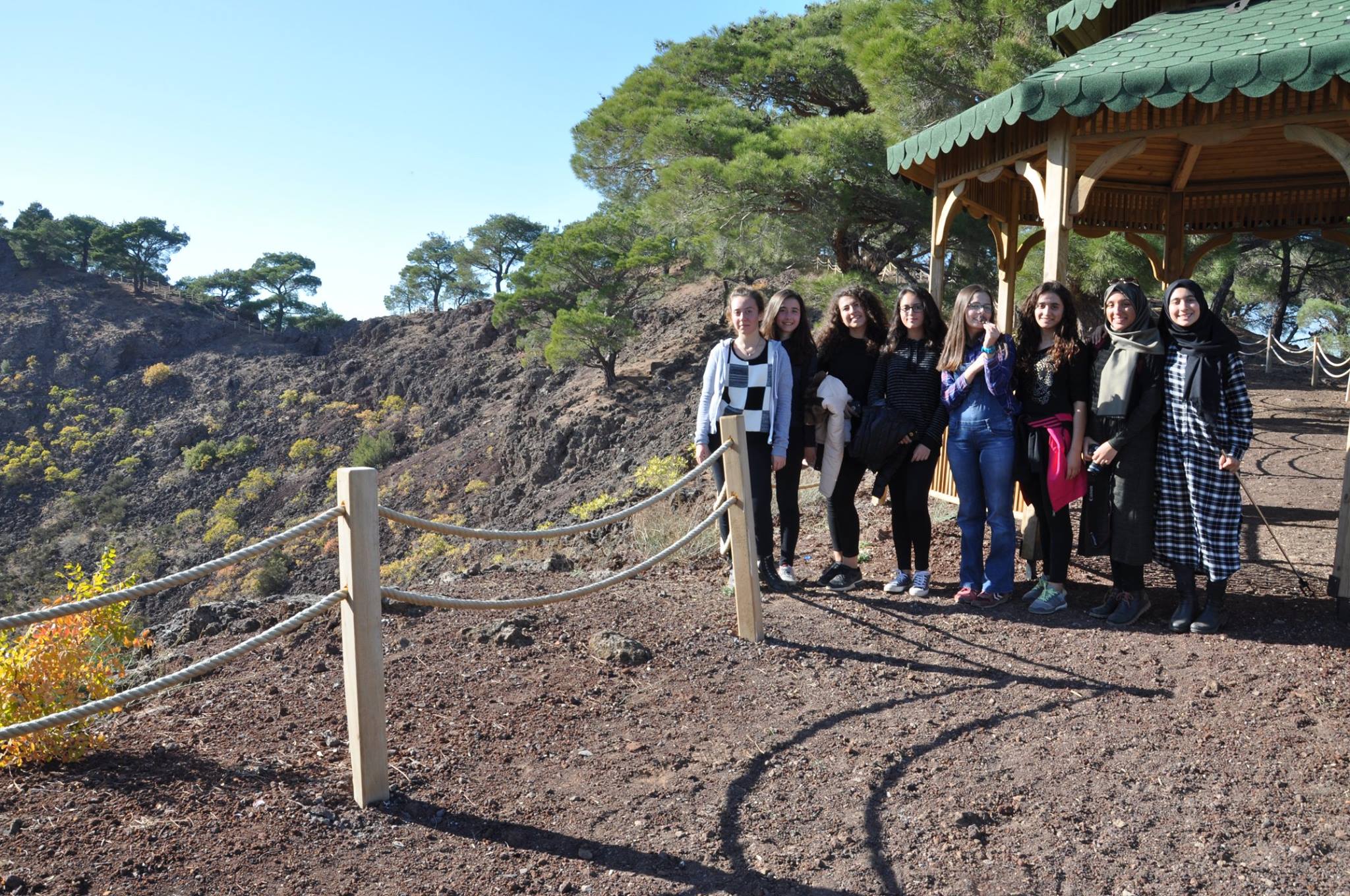 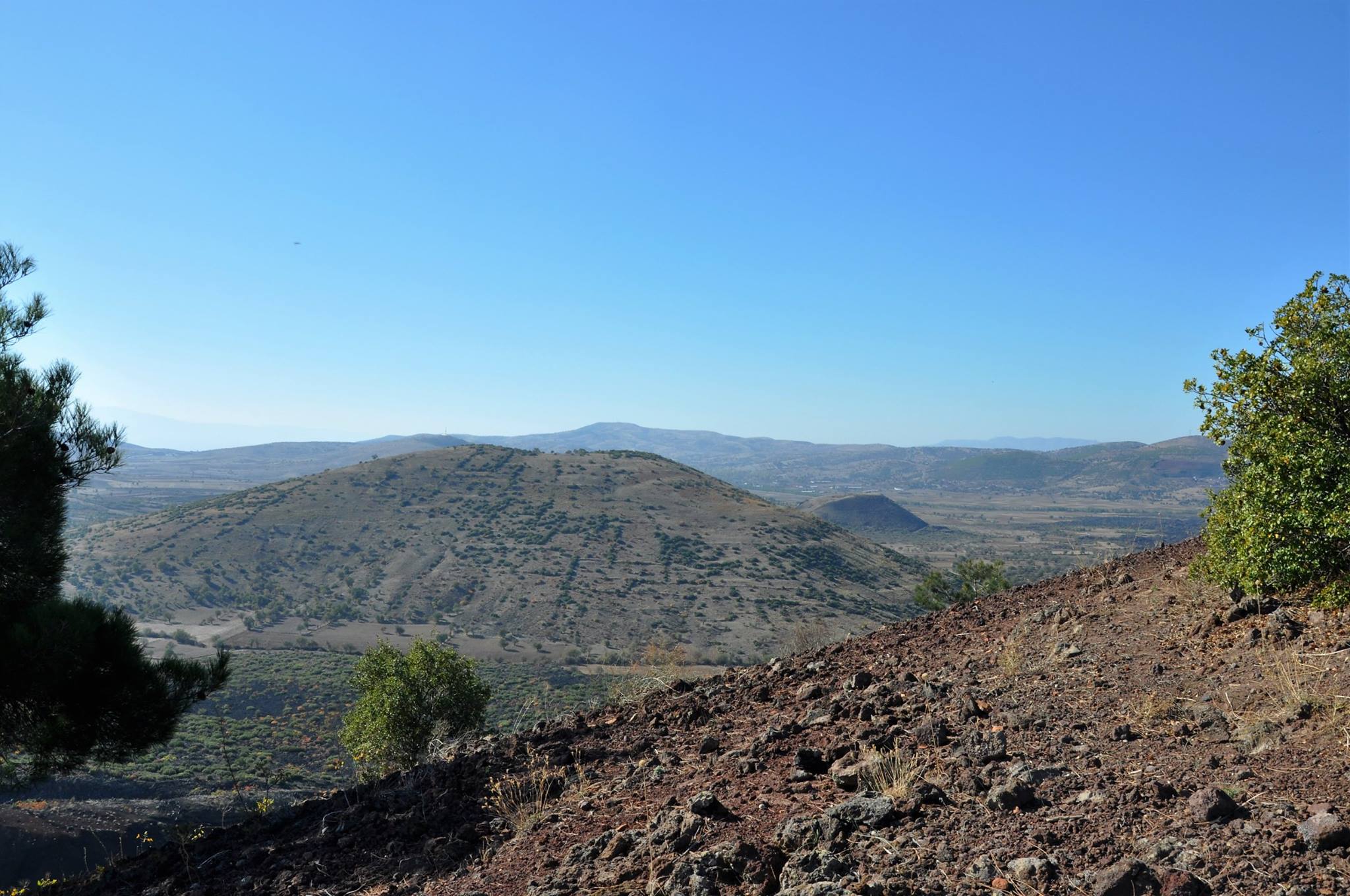 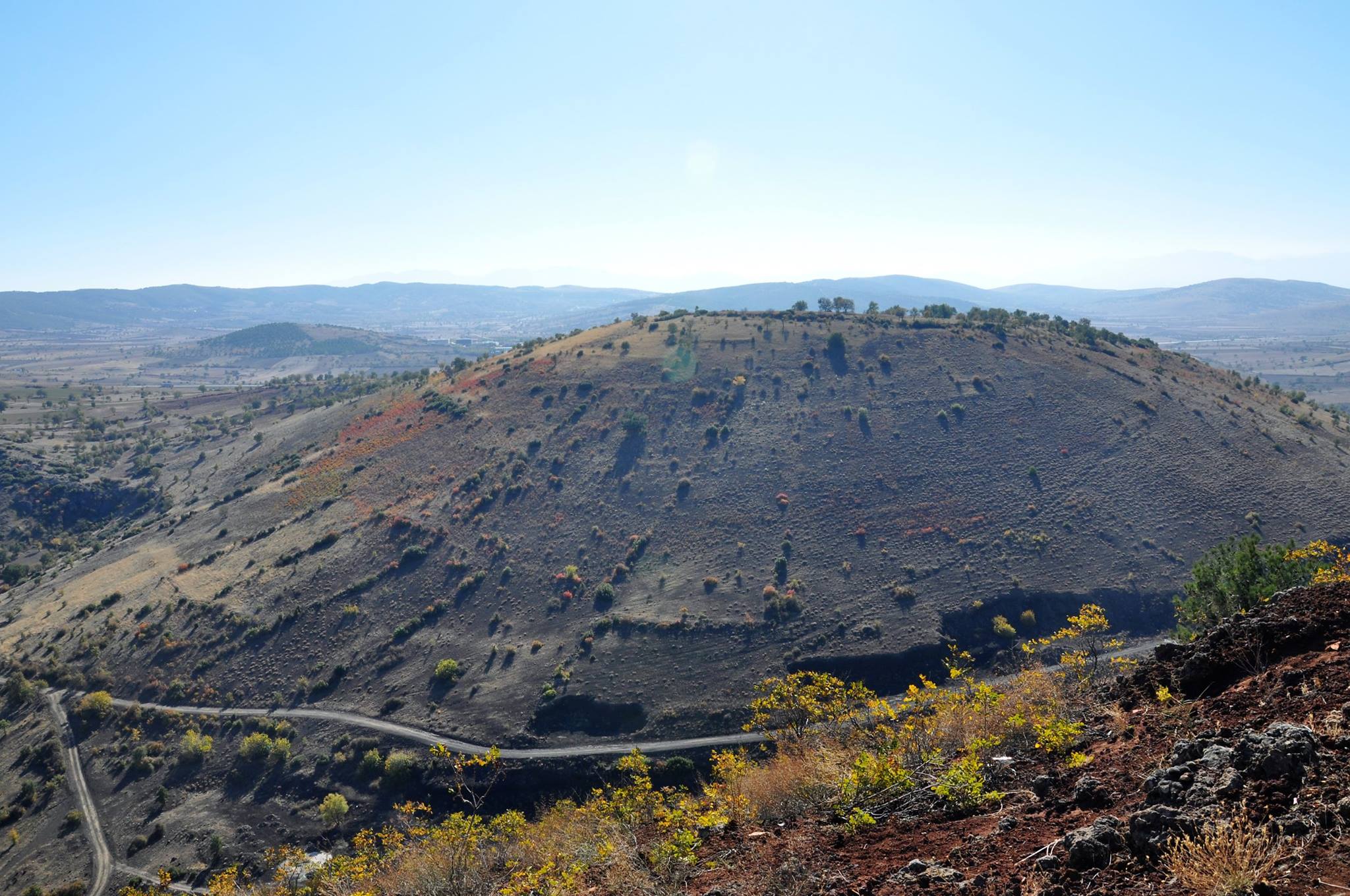 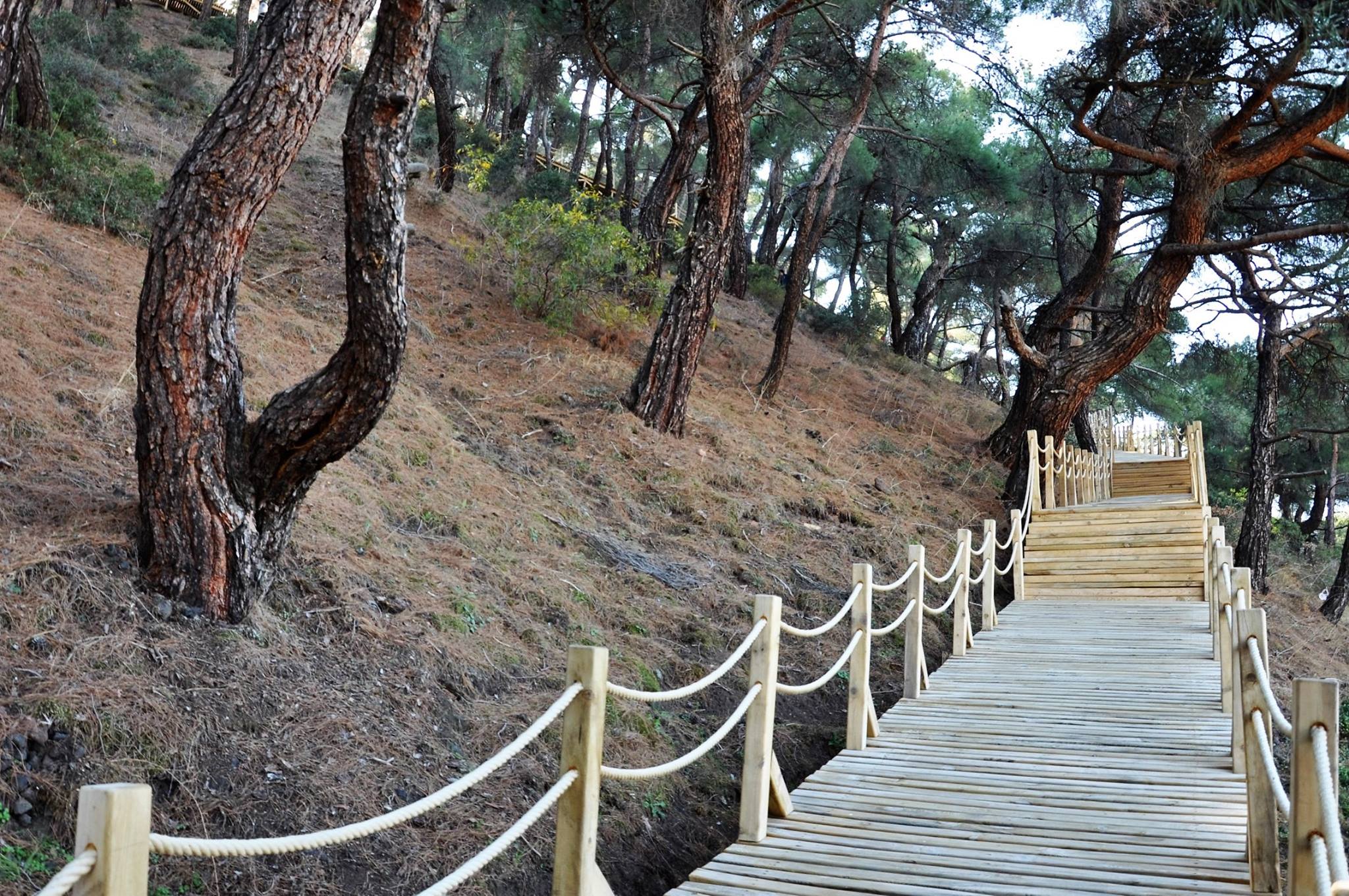 We made a trip to Manisa Kula Volcanoes with 45 students and 3 teachers in 03.11.16. Our purpose was to do an activity of our AB Erasmus+ Project (Trail of extinct and active volcanoes, earthquakes). This area is in the northeastern of Antalya and it’s about 350 kms far away from there.
This area is included in West Anatolia Alpine Himalayan orogeny. The Alpine-Himalayan orogeny was formed as a result of  the movement of Africa, India and Arabia plates towards North and their colliding with Eurasia plate. Turkey’s neotectonics time interval was the form occured by the continental collision (Eurasia-Arabia plates) which also led to the crustal thickening and shortening in Eastern Anatolia.
Kula and its vicinity has a geological structure which has volcanic feautures. Having started about one million years ago from today ,the volcanic activities, eruptions and  lava flows spreaded to the region following 3 main eruption periods and finally formed the young volcanoes by stopping about ten thousand years ago from today. They created one of the youngest large-scaled volcanic landforms of Turkey. Having small volcanoes, Kula and its vicinity was called as Katekaumene (the burned country) in history because of its volcanic character. The biggest volcanic peaks are Sandal and Kara Divlit. In this area volcanic cones are of different sizes and the volcano is a typical cracked fissure type of volcano. All the lavas are shaped as A type and the blocks and the roughness on them are scaled between a few cms and 1ms. There exists plenty of “hornitos” on lavas and slags as well as lava tunnels. All of the volcanoes are the “maar” type of volcanoes. Volcano cones have the types of “sinder” and “spatter” and show some differences according to their ages and corrosion levels. Especially in the old cones the craters are bigger while the cones in the younger cones are comparatively small. The cones consist of the tefra such as  lava, lavilli, slags and volcano bombs of different  sizes. Basaltic lava flows can be seen around these volcanic cones of which number is up to 70. The youngest ones have the appearence of cones. There are double creators in some of the volcanic cones. As a result of the researches conducted in this area it has been found that as Kula volcanites were active in 3  intermittent apart phases they were named Burgaz volcanites; Elekçitepe Volcanites and Divlittepe Volcanites. In the formation of Kula Geopark, tectonic activities have an important place. The Aegan Region, where Kula Geopark takes place, is one of the most active fields in the World in terms of the tectonic (earthquakes, volcanoes) under the control of continental collision and the process of scuba breakdown. Due to its natural, geological, cultural and archaeological richness, Kula Geopark  attracted the interest of lots of travelers and researchers and became the subject of  their works.  Keppel(1830), Hamilton and Strictland(1841), Texier(1862), Bresh and Premerstein(1891), Washington(1900), Philippson(1914) are only a few of them. There exists lots of natural heritage varied from karstic caves to fairy chimneys, canyons to volcanic cones in  Kula and around it..  Besides having a pre-eminencent geological and geomorphological heritage, Kula has a historical and a cultural heritage with its well protected Ottoman city architecture.

All the volcanic structure and the landshapes are the natural and cultural elements which are of the value to serve to the  scientific, cultural, recreational and the touristy aims on national and international levels. The coordinates are: 38°35’47.18”K 28°39’45.31”D. Kula Geopark field has a rich geological variety (geodiversity) enlighting 200 million years  history of the globe from the formation of old Paleozoic metamorphic rocksn (schist, gneiss, serpentinite) to prehistorical volcanic stroke. The process of promulgation of Kula as a Volcanic Geopark has 10 years of history. As a result of the “Kula Geopark  Europe Geoparks Network  Application Action Plan 2012” which was put into implementation with the coordination of Dr. Erdal Gümüş,Geopark specialist under the protection of Kula Manucipality, Kula Geopark which is the first and the only Geopark of Turkey was finally announced and certificated by UNESCO on 4 September 2013 as the member of the Europe and UNESCO Geoparks Network.
During our Geopark trip, the volcanic forms such as cone-shaped volcanic rocks, craters, volcano bombs, lava flows, cinders were observed interestedly by all of us.  It was an interesting trip as the students’ interest and curiosity for the enviroment increased. 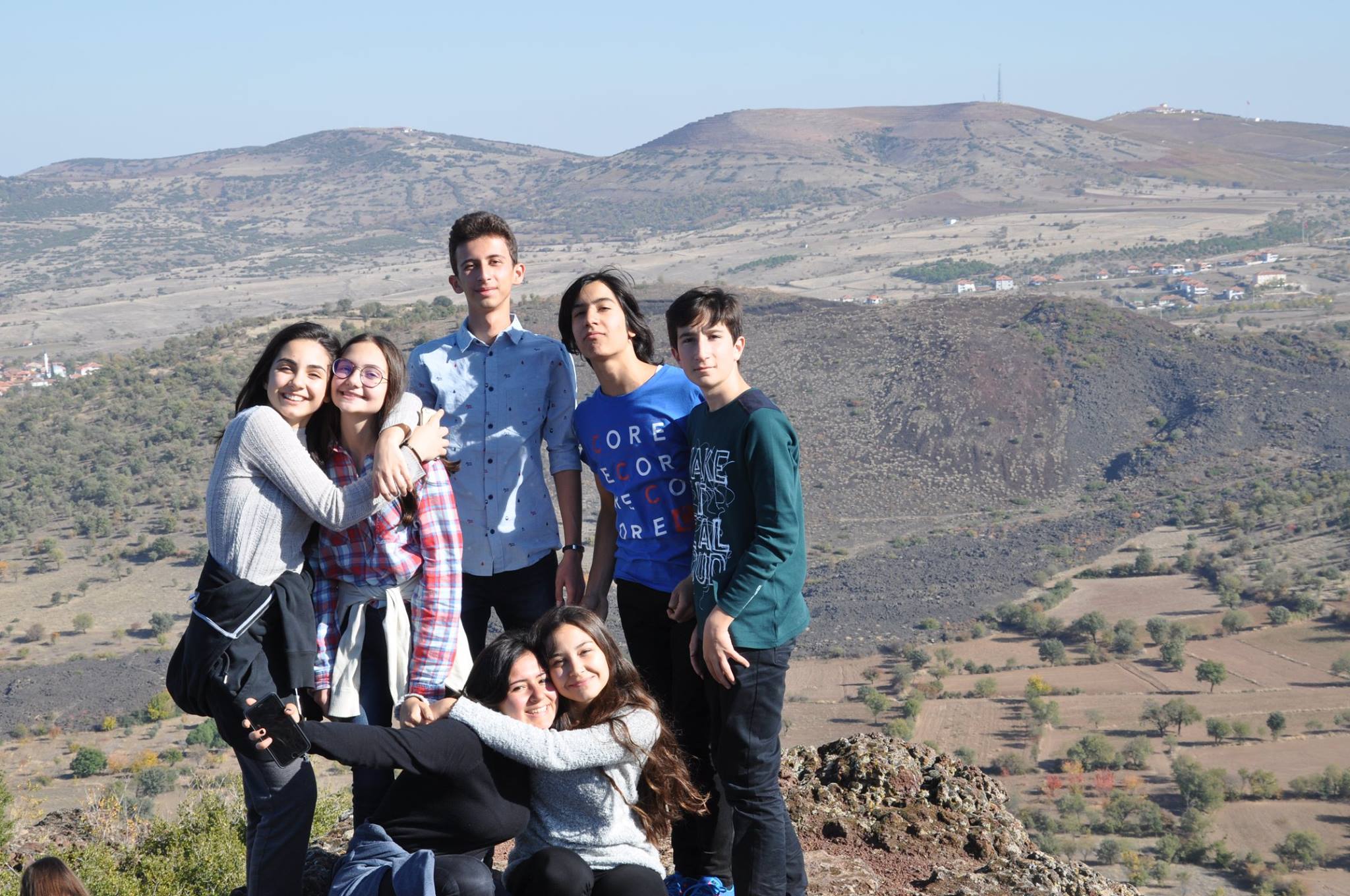 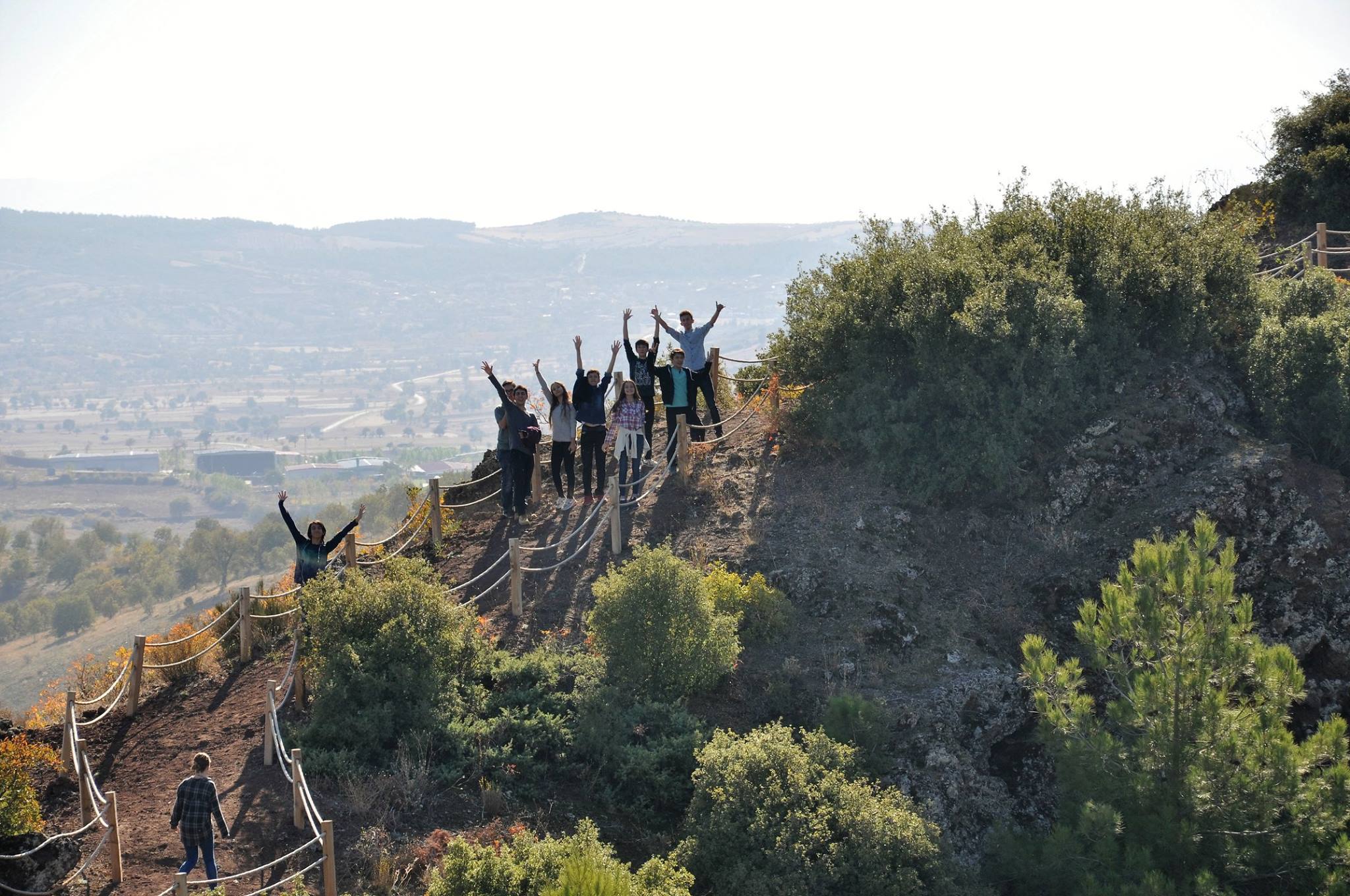